Using the Past to Write about the Present 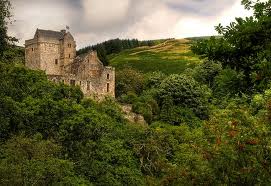 Continuing with my summer series of posts on places I’ve visited for inspiration and determined to get my money’s worth out of my membership to the National Trust for Scotland, I recently visited Castle Campbell in Dollar, a 15th century fortress (I’ve also visited Falkland Palace and The Pineapple in Airth but I’ll maybe save those for another post…).

The castle has a dramatic setting high above Dollar Glen and unless your car brakes have been recently checked, don’t even think about trying to drive there as it’s a white-knuckle ride on the way down the steep single track road. Then there’s a 500m 1:8 gradient walk to the castle itself so don’t wear high heels!

Wondering who has climbed the spiral staircase all those years before me.

I’ve been to the castle grounds several times before but have been too tight-fisted to cough up the entrance fee as it looked like it was mainly ruins and the money would be better spent on lunch (food always takes priority!). But, although the castle is in the care of Historic Scotland, our NTS membership got us in for free so we’d nothing to lose by adding a wander round to our day out.

I don’t write historical fiction and I don’t read a lot of it either and yet that doesn’t mean that a Lowland stronghold for a Highland chief lacked inspiration for my own contemporary writing. People watching is a favourite hobby of mine and there was no shortage of folk to observe.

There was the dour faced dad who looked like he’d rather be in front of the telly than drag his weans round the ruin when all they seemed interested in was making ghostly,”WoooooooOOOOoooOOOoWwwwooooooOOOOOOOOO” noises running up and down the 85 steps of the spiral stairs. Thankfully, there was peace outside, the gardens are a lovely picnic spot and one brave family tried to ignore the black clouds overhead but the Scottish ‘summer’ beat them and it was soggy sandwiches all round.

It was a dreich day but with a backdrop of the Ochil hills, the view from the Tower House ramparts over Clackmannanshire was still impressive. Up 20m high, we were surrounded by ancient trees and it felt like we were in the rain-forest, but with midges rather than monkeys surrounding us. A kestrel swooped right past us and down in the courtyard a swallow was nesting in the gap above a doorway.

A keek inside the creepy  ‘pit prison’ in the Tower House.

The building itself must hold 600 hundred years of stories and secrets within its stone walls. I admire writers of historical fiction for their ability to research the facts as well as create an interesting tale. At Castle Campbell, I found it hard to truly imagine what life would’ve been like behind the castle walls and wouldn’t dare attempt to write about that period in history. But I was inspired to write when I got home, although it was from a contemporary perspective.

I scribbled something down and on the spur of the moment, I submitted it to Paragraph Planet, a creative writing website which publishes a different 75 word paragraph daily (I haven’t heard yet if it will be used although only 1 in 8 submissions appear on the website. But published or not, and however short, every scrap of writing is good practice). Here’s my wee mini story, not a ghost story but just as dark.

The castle’s information panel described it as a ‘pit prison’. It was a hole underneath the floor with a trapdoor. It was no bigger than a double wardrobe. He marvelled at how anyone could survive in such a small dark space. He shoved me up against the wall to pose for a photo of our day out and told me to smile for the camera. I knew how it felt to be trapped.

Are you a reader or writer of historical fiction? Do you find old buildings inspiring too? Where have you been over the summer that has influenced your writing?

9 thoughts on “Using the Past to Write about the Present”