Bringing the Women of the Necropolis to Life

Any regular readers of my blog will know that I’m a big fan of the work of the Glasgow Women’s Library and have been on two of their heritage walks. I plan to go on all five of their walks and this Sunday I completed my third outing with their excellent tour guides – Anabel, Esther and Joyce.

The Glasgow bridge’s name comes from the more famous crossing in Venice.

This time the theme was ‘Women of the Necropolis’. I’ve passed the Necropolis or City of the Dead, many times but I’ve never ventured inside so this was a real eye opener as I’d no idea that there were so many fascinating stories behind those ornate iron gates.

It may well have been the first day of ‘flaming June’ but what started as a light shower turned into torrential rain as we walked across the Bridge of Sighs to enter what is the earliest garden cemetery in Scotland.

Corlinda reading a palm and surrounded by her clan.

My pal Veronica and I followed our intrepid guides round the Necropolis to learn about women such as Corlinda Lee aka ‘Queen of the Gypsies’ who allegedly read Queen Victoria’s palm and toured the country to host ‘gypsy balls’, a Victorian version of T in the Park where folk could gather in an encampment to eat, drink and be merry gypsy style. 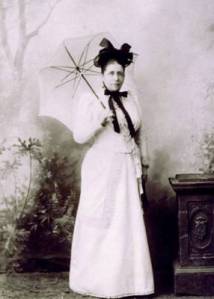 Isabella would’ve needed more than a brolly to keep her dry on the GWL tour!

Another remarkable woman was Isabella Elder, a wealthy philanthropist who championed a better standard of higher education for women by financially supporting Queen Margaret College. The first woman to graduate from QMC in 1894 was Dr Marion Gilchrist and when Isabella died, it was a tribute to her that the female doctor she helped to gain her degree was the one who signed the death certificate.

The Necropolis was built to commemorate the great and the good of Glasgow and most of the women buried there are only acknowledged by their role as a wife or daughter. But if you dig a bit deeper, you’ll discover the stories of many fascinating women. If ever I need inspiration to write about remarkable women from the past, a wander amongst the tombstones would unearth tales of characters worth bringing to life. Who wouldn’t want to write about a night at a gypsy ball hosted by Corlinda or the struggle to become a doctor in a male dominated profession?

Has a graveyard or woman from the Victorian era ever stimulated an idea for your own writing? 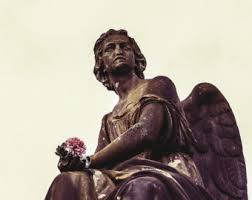 My favourite angel statue in the Necropolis – Glasgow style means a flower is an essential summer accessory.

4 thoughts on “Bringing the Women of the Necropolis to Life”