This is the tenth year of the Aye Write! festival, my favourite book event in my favorite city, but due to work commitments and a holiday, I could only fit in one visit to Aye Write! this year. 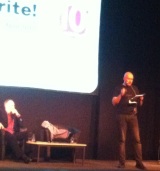 One of the headline acts I went to see was Irvine Welsh, a writer whose work I’ve enjoyed in books and films. The gritty urban Scots dialect used in Trainspotting gave writers like me permission to really go for it and give their characters an authentic voice. 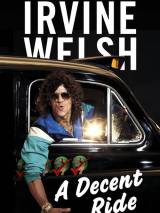 His latest novel, A Decent Ride, sees the return of one of the characters from Glue, with Juice Terry Lawson taking a lead role. Irvine didn’t just read an excerpt featuring Juice Terry and a new character, Jonty, he performed the scenes and it felt more like watching a stage play than a book event.  It’s because characters like Juice Terry and Jonty are so well drawn that although their behaviour and the wild scenarios they find themselves might be extreme, as a reader you believe they’re real people. And that’s what makes Irvine’s writing so powerful.

I also went to Karen Dunbar’s event at Aye Write. This was billed as ‘The Books That Made Me’ and as a fan of Karen’s comedy roles in shows like Chewin’ the Fat, I was interested to hear about the books she felt made an impression on her.  Again, this event was more like a chat show with Karen having the audience in stitches with her down-to-earth style and natural humour.

The book was a gift from Karen’s big sister.

Karen took a linear approach to her book selection and as part of that ‘journey’ she told the story of her first open audition at the Comedy Unit.  The importance of great characterisation was highlighted again as Karen decided to attend the audition in the role of an old woman which made it easy to express her talent.

Both events were excellent; Irvine and Karen demonstrated that if you get the character right, the rest will follow.

Is character more important than plot in your writing?