It was amazing to visit Moscow for my 50th.

So, it’s that time of year again when I blog (a rare occurrence these days!) about the books that I’ve read during 2018.

It’s been an interesting year for me, the highlight was turning 50 which was a great excuse to go on a special birthday trip to Russia. The trip was part holiday, part research for my latest novel which I’m currently editing. This meant that a few of the books I read this were either related to the Siege of Leningrad or were fiction novels set in Russia.

I also read more non-fiction books and memoirs than I usually do, my favourites being Poverty Safari by Darren McGarvey saka Loki and I am, I am, I am by Maggie O’Farrell.

As in previous years, I’ve made a conscious effort to read more books which are set in parts of the world that I’ve limited knowledge of and which feature issues I’d like to learn more about. Ones that stand out from these are Hum If You Don’t Know the Words by Bianca Marais, White Chrysanthemum by Mary Lynn Bracht, The Tattooist of Auschwitz by Heather Morris and Stay with Me by Ayobami Adebayo.

Again, I also tried to read more books by male writers and novels which made a big impression on were The Heart’s Invisible Furies by John Boyne, This is Going to Hurt by Adam Kay, The Gallows Pole by Benjamin Myers and Let Go My Hand by Edward Docx.

When choosing a book, I rarely make bad choices as I visit review websites that I rate and ask for word of mouth recommendations. But inevitably, there will be some books that I abandon for a variety of reasons, mainly because I haven’t connected with the characters and don’t care what happens next. This year, I started and failed to finish 6 books (if it feels like a chore to keep reading then it’s time to stop). The most notable one that I gave up on halfway through was this year’s Booker prize winner – Milkman by Anna Burns. I was keen to read this book and initially I was engaged by the voice and the setting. However, the stream of consciousness style became wearing and I grew bored with the slow pace. I skipped to the end, read the last couple of chapters and was glad to feel that it didn’t seem as if I’d missed much! 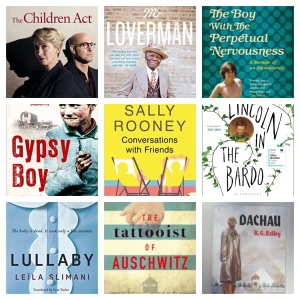 In total, I read 54 books and the fact that I finished them means that I rate them all, although some more than others. There were a few books that I really wanted to love but left me disappointed. These were This Is Memorial Device by David Keenan, My Beautiful Friend by Elena Ferrante and Conversations with Friends by Sally Rooney.  But these, along with the six books that I couldn’t bear to finish, are highly acclaimed novels which emphasises the point that taste in books, like everything else, is highly subjective.

It’s really hard to choose a favourite book from the 54 so I’ll pick out 9 (because that number fits nicely into the template for the images of the book covers). It’s an eclectic mix and I would highly recommend each title as being books which kept me thinking long after I read ‘the end’. For me, that’s the mark of an excellent book and as a writer, to engage a reader on a deeper level is the ultimate goal.