As a rule, I don’t tend to read crime fiction. But I always make exceptions for two of my favourite writers – Kate Atkinson and Christopher Brookmyre.  Both writers have created characters who are lovable rogues and it’s hard to resist the charms of Jackson Brodie in Kate’s novels and Christopher’s protagonist Jack Parlabane.

Not my usual book choice but undeniably a heart-warming tale.

I’ve read all of the books which feature Jack Parlabane but not all of Christopher’s novels as he’s dabbled in other genres such as sci-fi which I very rarely read (although I’ve just read Matt Haig‘s book The Humans which has an alien narrator and much to my surprise I enjoyed it). The character of Jack has been well rested and due a another adventure so it was great to hear that Christopher had written a new novel with the main man back in action.

Jack and his gallus banter is a sharp as ever.

I go to lots of author events and often after the event I feel that once is enough and I can cross them off my list of ‘must see’ writers. But I’ve been to hear Christopher talk several times as I’ve always come away inspired and entertained by his dry humour. So when I heard that Waterstone’s had organised a free local event to promote Dead Girl Walking then it was a no-brainer to get myself along to Behind the Wall in Falkirk with hubby in tow.

I had high expectations and I wasn’t disappointed, as on previous occasions,  Christopher was his usual witty self. My hubby had never seen Christopher perform his work and was quite shocked to hear the ‘c’ word being used in his introduction. Christopher made no apology for the strong language, his style is not for the easily offended and along with every swear word I can think of I’m sure by the end of the event the ‘c’ word had been aired at least half a dozen times. But that’s what makes Christopher’s work so real, characters like Spammy couldn’t talk in any other way. Hearing this no holds barred reading gave me confidence to be just as authentic in my own work and to stop worrying about causing offence.

Chris could swap careers and do stand-up comedy!

At times, although it was a book reading, it often felt that we were at a comedy night. Christopher has a quiet confidence in his dead-pan delivery and had the audience in stitches with his short story, ‘Puck Knows‘ about a group of teenagers at a performance of A Midsummer’s Night Dream in Kelvingrove Park, Glasgow. He’s also happy to share cringe-worthy anecdotes like the time a member of the audience in Dundee used the Q and A session to tell Christopher he wasn’t a fan of his work, he was only there to get a book signed for his daughter and could he come up to the stage for it to be signed to save him waiting in the queue at the end! Of course, Christopher was able to laugh this off and proved that while he takes his writing seriously and is a well established Scottish literary figure, he isn’t big-headed at all and is one of the most entertaining writers I’ve had the pleasure to hear talk about his work.

Christopher’s anecdote reminded me of a question I was asked recently in my day job during a training session on Maths for primary school teaching staff. I primed myself for a tricky question on differentiation and the teaching of core numeracy. The question was, “Where did you get your shoes?” At least it was an easy one to answer!

Who’s the most entertaining writer you’ve heard at an event?

If I had to choose only one writer as my all-time favourite, it would be difficult but in the end I’d probably vote for Kate Atkinson. Ever since I read her first novel, Behind the Scenes at the Museum, I’ve been a HUGE fan of her work (although I’d be lying if I said I enjoyed Emotionally Weird).

I’ve read all of her novels and I’ve tried on numerous occasions to get tickets to see her at book festivals but have never managed to beat the rush of sales. So when I noticed a link on Twitter to a series of free library events called Edinburgh Reads featuring top authors, I jumped at the chance to see one of my literary idols in person. So, on a dreich Saturday afternoon, I headed east with my hubby in tow to hear Kate interviewed by top literary agent, Jenny Brown, at the city’s Central Library.

Kate’s new book is a departure from her successful Jackson Brodie private detective series and it is a standalone novel where the reader is asked to wonder, “What if you had the chance to live your life again and again, until you finally got it right?” Life After Life tells the story of Ursula Todd born during a snowstorm in England in 1910, but two parallel scenarios occur – in one, she dies immediately. In the other, she lives to tell the tale. As the possibility of having a second chance at life opens up, Ursula lives through the events of the twentieth century again and again….

To be honest, if I wasn’t such a fan of Kate’s work, I wouldn’t be attracted by the premise of this novel as I prefer realism and a mere whiff of speculative writing would normally have me running for the hills. However, knowing how clever a writer Kate is and out of sheer curiosity, I was keen to see whether this latest offering would live up to my high expectations. I also follow a fantastic blog, On the Literary Sofa, which features reviews written by Isabel Costello and I have great respect for her opinions. Isabel’s review of Life After Life talks highly of the book giving a good insight into the story-line without containing spoilers so have a read if you want to know a bit more.

The opening scene still haunts me.

The conversation between Jenny and Kate was interesting as a reader and a writer. On a personal level, I found the fact that Kate’s debut novel was published when she was 43 inspiring and as a forty-something, this gave me hope that it’s never too late to launch a literary career. I also enjoyed the fact that Kate was very honest about her development as a writer, saying that in the early days, she found dialogue difficult to write and used to pepper it with unnecessary adverbs, a lesson I hope I’ve learnt too. She also spends a lot of time letting an idea mature whilst she’s doing mundane stuff like hoovering. As I can faff for Scotland, this reassured me that while I might not be tapping away on my laptop, I can still be ‘writing’ in my head, well that’s my explanation and I’m sticking to it!

It was also refreshing to see that someone who is a best-seller, achieving international acclaim and awarded an MBE can still be so down-to-earth and humble about her success. As a literary idol, Kate didn’t disappoint me.

Who is your literary idol? If you’ve met your idol, was it a positive or negative experience?

P.S. Apart from admiring her amazing literary talent, being star-struck and gooey-eyed in the second row, I couldn’t help but also be literally dazzled by Kate’s stunning diamond bracelet. She’s clearly a lady who doesn’t feel the need to brag about her accolades but does like a bit of bling-my kinda woman!

I’ve mentioned previously that Reading Like a Writer by the aptly named, Francine Prose was one of the best set texts from my MLitt course. It taught me how to have a better appreciation of what I read but the one downside is that I now find it hard to switch off my writer’s eye when reading a novel. This means that I’m constantly analysing the characterisation, pace, POV, structure etc and failing to lighten up when I’m supposed to be reading for pleasure. 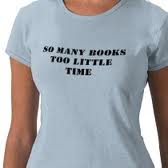 I wish I could buy the body to go with the T-shirt!

The result of this critical approach is that I’ve just given up on my 4th book in a row. My reading habits have changed over the years. I’ve always been an avid reader but for some unknown perverse reason, I made myself keep reading a book until the end whether I was enjoying it or not. I doubt if I’m alone in suffering from this affliction but somewhere along the line, I had an epiphany (just for the record, there were no angels involved or speaking in tongues, and it wasn’t after a few large voddies) that life is too short and my ‘to-be-read’ pile is already too high to bother sticking with reading books I don’t like.

This new ruthless approach has got even tougher in the wake of a house move and the knowledge that my TBR pile would either have to be read quickly or packed and carted off to my new abode.  Several books had been gathering dust on the TBR pile for various reasons, and many had made it on to the list due to being classed as a book I felt should read (but who says so and why should I care?).

The first one to be tackled was Lanark by Alasdair Gray. This book is hailed as a modern classic, Glasgow’s Ulysses, but I’m not embarrassed to admit that I just couldn’t get my head round it. The semi-autobiographical parts based in Glasgow appealed but the surrealism of Gray’s vision of hell was far too sophisticated for my wee brain. The next couple of books will remain nameless, let’s just say I might cross the paths of these writers in the future and I don’t want to have to run and hide from them if I dared to air my feelings publicly .

The queen of ‘tragi-comedy’ writing.

After a hat trick of failed read throughs, I went for a safe bet. Even although I rarely read crime fiction, I love Kate Atkinson’s novels in the Jackson Brodie series, I really enjoyed Human Croquet and rate Behind the Scenes at the Museum is one of my all-time favourite books. The only one of her books I’d still to read was Emotionally Weird, so I felt sure that I was on to a winner, but I’m sad to say that for the first time ever, Kate let me down. For my tastes, the book seemed too self-consciously ‘literary’, with no plot to speak of involving unlikeable caricature characters and in no way lived up to my high expectations.

So I’m on to number five, with my hubby breathing down my neck to reduce the Everest proportions of the TBR whilst thrusting a packing case under my nose.  I’m quietly confident I’ll go the distance with this one, ‘Alone in Berlin’ by Hans Fallada, partly because I’ve got an interest in the Nazi regime of WW11, the city of Berlin and a love of novels based on true stories (which pander to my cynical nature).

Do you have a book that’s a permanent fixture on your TBR pile? Do you stick with a book until the end? Do you have a cut-off point? What makes you throw your book in the charity bag or even at the wall? And what makes a book worth packing to take to a new home?

Try telling that to my hubby!