‘Debauchery and Deviance‘ – the title of the walk was enough to hook me! Who wouldn’t be intrigued? I certainly was when a writer friend, Suzanne Egerton posted on Facebook that she was leading a tour around Glasgow city centre.

The walk was part of an eclectic programme of events organised for the national Sexology Season in Manchester, Brighton and Glasgow incorporating live performance, films, salons, archives, talks and literature events. I couldn’t resist investigating further…

The blurb stated, “the mischievous walking tour uncovers the debauched history of Scotland’s most populated city with tales of sex in all its guises, from the scandals of Victorian society, burlesque and queer lives to ‘adult’ cinema. We’ll also take a look at the Church of Scotland’s influence on sexual attitudes”.

Some buildings look better after dark!

I booked a place on the free event faster than the crack of a dominatrix’s whip and last Wednesday I met up with the tour group outside the infamous Barrowland Ballroom.

Along with Suzanne, there was another tour guide who was clearly recognised by the rest of the group and caused a ripple of excitement. I’d no idea who she was but I was soon informed that it was none other than highly respected singer-songwriter, Horse McDonald who was there to share her own experiences of performing at the iconic venue. 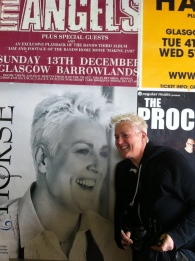 Horse posing beside a Barrowland poster of Horse!

Much to the surprise of my friend, Anabel, who’d joined me on the walk, I’d never been to see any bands at the venue so everything was new to me! Suzanne and Horse gave us a fascinating insight into stories associated with the Barrowland, such as the case of ‘Bible John’ who frequented the dance hall in the late 1960s to lure his victims and murdered three young women. Horse took us on a back stage tour and it was an eye-opener to see that areas like the dressing rooms weren’t ‘shabby chic‘, they were simply ‘shabby!‘

We then visited  the world’s oldest surviving music hall – the Brittania Panopticon. I’ve walked past the exterior of this building many times but knew nothing of the history of this amazing hidden treasure. The Brittania is famed for the debut of Stan Laurel in 1906 and since opening in 1857 the venue has played host to a carnival, wax works, a freak show and even a zoo in its basement! Our group was very lucky to learn about this fantastic piece of entertainment and social history from Judith Bowers who founded a charity to rescue this historic building and continues to campaign to bring the music hall back to life.

The hype of the walk’s title didn’t disappoint. My knowledge of Glasgow’s seedier side is much richer and I’m not short of writing ideas now!

Have you been on any guided tours with gory or gritty details that fired up your creativity? 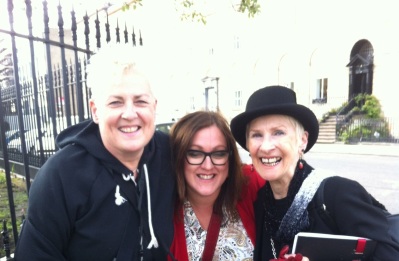 Me with the excellent tour guides Horse and Suzanne.