In my last blog post, I praised the writer William McIlvanney for his work capturing working class life in contemporary fiction and giving a voice to the people he grew up with in the west of Scotland.  I’m fascinated by authentic representation of working class culture and heritage and so thanks to the wonderful Glasgow Women’s Library, I was able to learn more about one of my favourite artists – Joan Eardley. 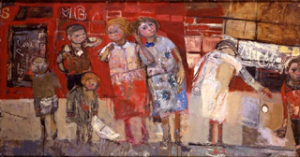 If McIlvanney used words, Eardley used paint to give us a credible portrait of the reality of life in deprived areas and she is famous for her paintings of ‘street urchins’. She also painted stunning seascapes whilst living in the remote village of Catterline in Aberdeenshire and her atmospheric paintings of stormy seas are powerful and full of energy.

A beautiful ‘coffee table’ for an art lover. I hope Santa reads this blog!

Christopher Andreae has written a biography of Eardley and his talk, ‘Summer Sea, Winter Sea’ at GWL was a fantastic insight into the artist’s life and work. I love art but I’m no art critic so it was a real privilege to benefit from Christopher’s knowledge of her work.

Sadly, Eardley died aged 42 from breast cancer and I was left wondering how her career would’ve developed if she had the chance to live longer. Christopher’s slide show highlighted that Earley is one of the most influential painters of her generation whose paintings and drawings reflect urban and rural Scotland. 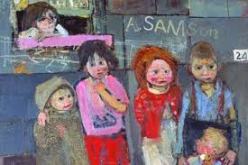 Her portraits of the children of inner city Glasgow and her east coast seascapes are a rich source of inspiration for a writing exercise. Her vibrant paintings of children make it easy for me to imagine my dad and his siblings playing in the street all those years ago. My dad was one of a family of fourteen children who operated a ‘first up, best dressed’ lifestyle and their childhood stories would fill several books.

Have you ever used artwork as a prompt for your writing? Are you a fan of Eardley’s work?

If you want to know a wee bit more about Eardley’s life and work, this short film is a good introduction.

I’ve been to hear William McIlvanney before at Aye Write where he came across as charismatic and delivered moving readings. So when I saw that he was appearing at the Bloody Scotland International Crime Writing Festival in Stirling I jumped at the chance to see one of Scotland’s finest contemporary writers again.

The event was billed as, ‘The man who began it all ’ as McIlvanney is credited with being the man who created the ‘tartan noir’ genre and can lay claim to being the godfather of crime writing in Scotland.

McIlvanney is back on the publicity circuit since Edinburgh-based publisher Canongate  relaunched the author’s Laidlaw trilogy after discovering his classic works were out of print. A surprise element of the event was when Jenny Brown, his new agent, announced that the Saltire Society was to award him with the Andrew Fletcher of Saltoun Award for his long-standing contribution to Scottish literature. It was an added bonus to be in the audience for this news and to hear McIlvanney’s humble appreciation of this great honour.

One of the reasons why I admire McIlvanney and feel he deserves this award is that his working class roots are at the heart of his work which is something I aspire to do in my own writing. And yet I’m ashamed to say that I’ve yet to read any of his novels. I don’t normally read crime fiction but I must add Laidlaw to my mountainous To Be Read (TBR) pile.

Although at the event, it didn’t matter that I, or my best pal, Veronica hadn’t read any of his work yet as we both felt that we could’ve sat all day listening to McIlvanney’s quick-witted banter. His anecdotes of growing up in Kilmarnock are very funny and touching at the same time.

After reading an excerpt from Laidlaw, McIlvanney also treated us to a piece called Zooistry which you can find on his website which hosts a variety of essays on diverse topics under the banner of ‘Personal Dispatches’, described as a “haphazard record of experience, feeling and thought . .  .” In Zooistry, his take on how our society’s relationship with pets has changed over the years touched a nerve with Veronica and I who both treat our dogs like family members rather than domestic animals and we laughed and cringed at the same time.

It might seem weird to rate McIlvanney as a writer I admire when I’ve never read any of his books. Have you been to see an author without reading their books? Do you feel guilty that you have writers on your TBR list who you feel you should’ve read years ago? 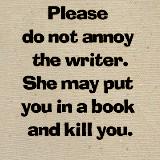 I’m not a ‘morning’ person (some would argue that I’m not an afternoon or night person either) so I am relieved that my uni classes are timetabled later in the day. A slow start suits me best (my family know to stay well back until at least 9am) but I’d registered for the Write Now! Conference so I found myself on a train into Glasgow yesterday and Friday, long before it was safe for me to be near people.

It was well worth the effort of getting out of bed early. The conference was held in the Mitchell Library and was part of the Aye Write! Book Festival. The days were packed with guest speakers and by the end of the closing remarks, my bum was numb but my brain was buzzing. The blurb said. “The event is aimed at early career writers (folk like me) and scholars of all sorts and to allow attendees to share their research and creative output but also to foster a community of writers and researchers.

Did it do what it said on the tin? Yes! I certainly got my money’s worth out of the two days. An added bonus was getting the opportunity to meet up with the lovely Anne Glennie, a fellow writer I’ve met via Twitter.

The opening session was called ‘Publish and be Damned?’ and looked at the impact of digital publication and social media on the publishing industry. Scary stuff was aired about the global domination of cultural barbarians, Amazon and Google but it wasn’t all doom and gloom. Independent publishers like Cargo and new literary magazines like Octavius mean that the Scottish publishing scene has never been more exciting.

The first day was a Skills Day and I opted to go to the http://www.WRITER session run by Cat Dean. Despite technical hitches, Cat did a great job introducing our group to the wonders of WordPress.com and helped me get this new website up and running.

Over lunch (I passed on the diced dried veg in dirty dishwater aka Scotch Broth and nibbled at the dullest sandwiches I’ve seen at a buffet since 1978), there were readings from creative writing students from Strathclyde University and the talent showcased was intimidatingly good! Watch out for names like Iain Ferguson, Craig Lamont, Mary McDonough and Bryony Stocker.

But the highlight of Day One for me was undoubtedly the keynote address by Christopher Brookmyre. The award winning writer inspired and entertained the audience with his frank and funny account of his writing career. I was heartened by the fact that he wrote four novels before being published so there’s hope for me yet!

I finished the day by attending William McIlvanney’s event at Aye Write! with my best friend Veronica. Wow! He was an engaging mix of humour and humility about his phenomenal talent.We were almost moved to tears when he read out snippets of his latest work. The man is a living legend in Scottish literature!

Day Two was a series of panel discussions. My favourite ones were’ What Happens when Elephants Teach Zoology?’  and ‘Teaching Creative Writing’ about the pros and cons of a creative teaching programme. The key thing that all of the speakers agreed on was that you can’t teach creativity but you can nurture confidence in writers.  The conference round-up was a great finale and threw up questions such as, is Scotland a vibrant creative culture or a provincial backwater for writers?

I left the Mitchell library hungry but full of confidence that Scotland’s literary scene is vibrant and ready to face the future.